You are here: Home » Questions Interview Linux » What is the Linux Kernel?

The kernel is a piece of software that, roughly speaking, provides a layer between the hardware and the application programs running on a computer 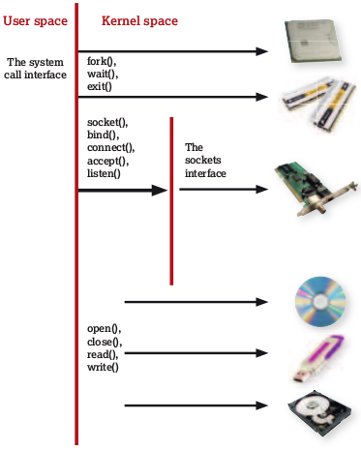 The kernel program has a name. That name is often something like vmlinuz-.

Maybe, vmlinuz-3.1.1. That program needs to be loaded into memory and run, and that operation is done by a bootloader.

With Linux, we often have a bootloader called GRUB. So, GRUB reads the kernel file from disk into memory, and will transfer control to it.

The kernel program, like other programs, has command-line parameters, and GRUB is responsible for passing those parameters to the kernel.

The Linux kernel is an API. It provides a programming interface.

The functions that we can call from user space into the kernel we call system calls.

Also, our file system has device files. We interact with device drivers by doing operations on those device files. Those are standard system calls, like read and write and open.

The kernel is a gatekeeper. The kernel enforces privileges. In Linux, we call those privileges capabilities. In the Linux kernel sourcecode, it refers to checking the capabilities of a process to see if it allowed to perform some sort of privilege operation. We think of root processes having all the privileges.

The Linux kernel also implements a number of security policies. The underlying mechanisms used by SELinux, for example.

The kernel image, though, is sufficient to boot to user space, to begin running some processes.

Once we have processes, we can load additional functionality into the kernel through the loadable kernel module mechanism. The loadable module mechanism means we can just load the drivers that we need. We don’t need to load drivers for hardware that’s not present.