You are here: Home » Questions Interview A » Netwoking Labs » TCP / IP » Comparison between TCP/IP and OSI

Like OSI network model, TCP/IP also has a network model. TCP/IP was on the path of development when the OSI standard was published and there was interaction between the designers of OSI and TCP/IP standards. The TCP/IP model is not same as OSI model. OSI is a seven-layered standard, but TCP/IP is a four layered standard. The OSI model has been very influential in the growth and development of TCP/IP standard, and that is why much OSI terminology is applied to TCP/IP. The following figure compares the TCP/IP and OSI network models. 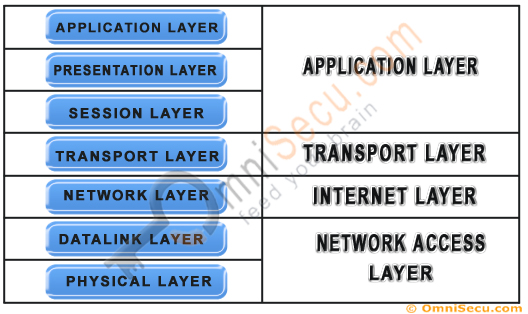 As we can see from the above figure, presentation and session layers are not there in TCP/IP model. Also note that the Network Access Layer in TCP/IP model combines the functions of Datalink Layer and Physical Layer.

Packet switching network depends upon a connectionless internetwork layer. This layer is known as Internet layer. Its job is to allow hosts to insert packets into any network and have them to deliver independently to the destination. At the destination side data packets may appear in a different order than they were sent. It is the job of the higher layers to rearrange them in order to deliver them to proper network applications operating at the Application layer.

The most popular LAN architecture among those listed above is Ethernet. Ethernet uses an Access Method called CSMA/CD (Carrier Sense Multiple Access/Collision Detection) to access the media, when Ethernet operates in a shared media. An Access Method determines how a host will place data on the medium.